Visit msnbc.com for breaking news, world news, and news about the economy

Thank you to Rachel Maddow for explaining the nuclear situation in Japan. But I got ahold of Glenn Beck's response that will appear later this afternoon:

"Hello, my fellow patriots. If you are watching this right now, you - YOU - have been chosen. Chosen, why? WHY? Ask yourself this question instead: are you watching this show? Well, ARE YOU? I thought so.

Let's jump in our time machine.

1945. Hitler is still up to no good. And America says it's time to kill Hitler once and for all. But Harry Truman gets a hunch that Hitler is hiding in J-A-P-A-N. The man loved sushi, and can you blame him? So Harry Truman gets in his plane and drops three bombs.

Three bombs. Not two, like the mainstream media wants you to believe. "Little Boy" and "Fat Man".... the S-O-N, the F-A-T-H-E-R, hmmm what's missing here.

I think you know why. You feel it in your gut. 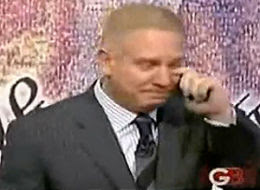 Well one patriot had to guts to speak the truth. And just how people will try to slander you when your mind's eye is open, they tried to take her down as well. Can we get a clip?

THIS is how a Nuclear Reactor works! It's not through a process on an atomic level called "Fizzin'" - that's what they may tell you but when have they ever been right? Did you know Obamacare provides X-Ray coverage for cancer patients? Why is he so interested in learning about how cancer is formed? What do we really know about X-Rays anyway???

As always, you need to educate yourself. Because I love this country. [sobbing] And I don't want to become Japan. When we come back... Earthquakes. George Soros. Totally different things. Or are they?"