"The Happening" Was A Happening 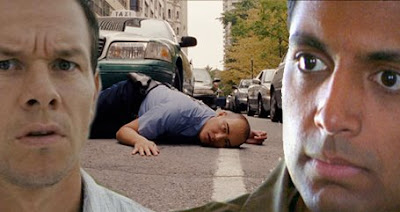 Last night Jim and I decided to finally hunker down and watch The Happening. M. Night is sort of a running joke in our apartment, a caricature combination of Eric Cartman and Kirk Van Houten (father of Milhouse). I'm always fascinated by people with clearly damaged egos who try to guard their true feelings, and nothing is more fun than parsing through a closet misanthrope's writing.

So before we went all in, we made sure to recap "Lady in the Water." To those who haven't seen it, it was a box office failure which was pretty much about an underappreciated writer, played by M. Night, needs to write stories to save the world (or something like that) and the most evil character is a petty movie critic.

So naturally, the most exciting part of "The Happening" is finding out who M. Night blames now. The answer: you!

Need proof? Only M. Night could write a movie where people stop and kill themselves, and then later have Zooey Daschenel say "Can you believe how crappy people are?"

When the studio was publicizing "Lady in the Water," we were (repeatedly) told this was a bedtime story he told his kids. Aww. Well since that movie's failure, he's apparently taken a hatred for children as well. Why else would he introduce two boys in the movie and then just minutes later have a faceless person poke the barrel of a shotgun out a door and shoot the children at point blank... oh and don't worry, he let's you see exactly how a spray of bullets hitting a child would look like. 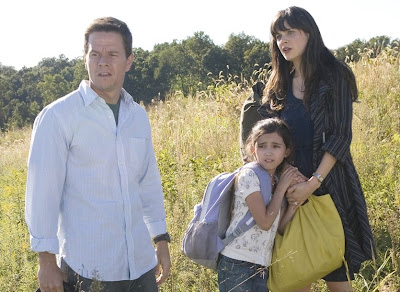 don't worry this kid doesn't get shot
Think how far this man has come. In "The Sixth Sense" he directed Haley Joel Osmont into an Oscar-nominated performance. In "The Happening" the child that gets dumped onto Mark and Zooey is merely a prop.

I'm beginning to think the hokeyness of the tagline was actually really well designed. "We've Sensed It. We've Seen The Signs. Now... It's Happening." I think they realize that most of us are more intrigued with the writer/producer/director than the movies, and each new movie is just another chapter of this epic saga. It's like a more cynical, tragic Harry Potter series (and if you ask me, way more interesting). We've sensed that M. Night has lost trust in all humanity, we've seen the signs that he might be losing his mind, and now it's finally happening.

Still, this movie was way more watchable than Lady in the Water. Don't get me wrong, this is one of the most horrible movies I've ever seen. But there were some amazing moments, one I must share with you.

During what they think is an impending airborn toxin attack, Mark Wahlberg yells at his wife and the few strangers with him to give him a second so he can PERFORM SCIENCE... This literally happens:

it gets better... remember he's in a field, with evil wind approaching, and a group of strangers seemingly waiting for him to lead them...

"All right, be scientific, douchebag. Identify the... rules... design the experiment... careful observation, measurements, that's what I'm trying to do, interpret the experimental pattern, interpret... What if it IS the plants? That group was larger than ours. This thing's been escalating all day. Smaller and smaller populations have been setting this off. They react to human stimulus. Maybe people are setting off the plants?"

I hope I haven't given too much away, but I really encourage you all to see this movie. The dialogue is beyond atrocious, the direction of the actors is absent, and the tension is really forced. Watch it with friends and enjoy the ride down Shyamalan's psyche or take a shot every time someone says "happening" and you've got one of the most amazing drinking games ever. Either way, it's a hilarious time.
Posted by Joshua Sherman at 8:41 AM